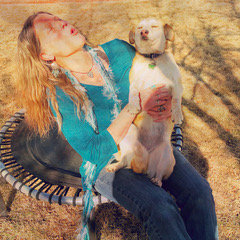 Jenn is now doing Children’s Shows! A unique performance, which includes tunes from her new album All Together Now! (2021) Nature-based education, mixed in with a lot of interactive fun. From Jenn’s backyard farm, to bubbles, to honey bees, to caring about the earth and each other, this is an entertaining show for kids of ALL ages.

“Families can sing, dance and laugh along with singer/songwriter Jenn Cleary. Jenn’s songs are both lively and educational and especially well suited for young audiences.” – Ogden Nature Center

Jenn Cleary is a singer-songwriter from Boulder, Colorado, with twenty years’ experience performing on international stages. Highlight shows include Sundance Film Festival, Colorado Rockies games, opening for Shemekia Copeland, and several European tours. She’s studied with many incredible songwriters, including Livingston Taylor and Peter Yarrow of Peter, Paul and Mary. She has a range of song styles and performs bluesy acoustic solo shows as well as rockin’ shows with her full electric band. She has released two albums of original songs and one covers album, and she just released her first children’s album, which has won the prestigious recognition of a 2021 NAPPA award for being best in the music industry, as well as the Hot Diggity Award that signifies innovation, quality, entertainment, educational value and a commitment to excellence.

Jenn has always included playful tunes in her output and her children’s album blends full-on fun with environmental and social consciousness. Her songwriting for children is informed by a lifetime of assisting, educating, and raising them. She has been a founder of a non-profit that provided housing, schooling and medical care for Nepali children, as well as a K-12 private school in her community. She has also been a foster parent and raised her own three children.